Your Dream Pedalboard, In a Very Portable Package!

Plug into the compact Line 6 M9 stompbox modeler and get all the classic and modern pedal effects you need! Line 6 even built in an incredible 28-second looper, for amazing creative possibilities! The M9 gives more than 75 astounding effects, and you can use up to three at once. This tough yet very portable unit gives you seven footswitches, easy-to-reach control knobs, and a bright backlit display that reads clearly on even the darkest stages. You can create up to six pedalboard "scenes," so your rig is ready for the gig when you are. Make the M9 the center of your rig!

Put over 75 amazing effects at your feet, without all those patch cords

Plug into tangy choruses, syrupy sweet reverbs, distinctive distortions, and more! Line 6's M9 stompbox modeler has a comprehensive model list that features effects from best-selling Line 6 pedals. Get all the famous models from the DL4 Delay Modeler, DM4 Distortion Modeler, FM4 Filter Modeler,MM4 Modulation Modeler, Verbzilla, Echo Pro and others. Each model was inspired by a legendary stompbox tone and carefully crafted to produce all the tonal colors and nuances made famous by the original.

Use multiple effects, the way you want them

M9 Stompbox Modeler is three effects units in one! Three effects can be used simultaneously, with three more at the ready. With 100 percent control over effect type and arrangement, you're free to use one effect at a time, arrange them into tried-and-true combinations, or create your own original blends. Different stompbox arrangements, or "scenes," can be created for each of your gigs-one for your metal band, one for your punk band, one for your Top 40 gig - you get the picture. Create and save up to six scenes (scenes can be backed up to your computer via MIDI in/out).

M9 Stompbox Modeler is easy to use, just like a classic stompbox. Tweak your tones on the fly using the dedicated knobs. No menus, no saving, no hassles-just turn the knobs and you're done. And your settings remain when you power down! The bright LCD shows parameter names/values and the built-in chromatic tuner. (When activated, the tuner mutes the output signal.)

The M9's built-in 28-second looper delivers extended, in-the-moment looping and unlimited sonic possibilities. Looping has never been easier with dedicated footswitches for all looper controls: Record/Overdub, Play/Stop, Play Once, Undo/Redo, Half Speed and Reverse (the looper and the effects units can be used simultaneously).

The I/O options you need

M9 Stompbox Modeler is ready for anything with its full arsenal of ins and outs. 1/4" mono/stereo inputs and outputs (with True Analog Bypass or DSP Bypass) let you put M9 Stompbox Modeler before, after or in between your other pedals. Connect a pair of expression pedals to the two 1/4" expression pedal jacks to morph smoothly between tones and control the new Pitch Glide and Wah models. MIDI in/out, which is perfect for backing up your "scenes," also makes M9 Stompbox Modeler compatible with many popular MIDI control systems. 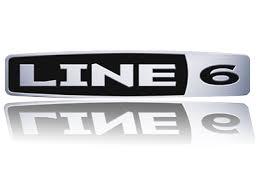 Line 6
Line 6 produce digital modeling guitars, amplifiers (amplifier modeling) and related electronic equipment. The company was launched from Fast-Forward Designs, where pro audio products were developed. Legend says the company only had 5 phone lines, and the guitar products were developed in secret, so any call on "Line 6" was a secret call about the guitar or amp products. Their current product lines include electric guitar online and acoustic guitar online, bass guitar online, and you can buy guitar amplifier online with the Line 6 brand. You can also buy pro audio online as they produce USB audio interfaces and guitar/bass wireless systems. With a long history of ingenuity and passion for innovation, Line 6 has changed the industry.