It’s a well-known fact that running two amps is not only enormous fun, but also a time-honoured way of achieving bigger tones on stage and in the studio. Whether it’s switching between two different amplifiers for their individual characteristics (rhythm and lead, for example) or using them simultaneously for huge walls of sound, pros have been employing this setup for decades. Achieving this easily, however, has always been a problem for guitar players. Poor quality passive ABY boxes/line selectors load the guitar signal down, degrading the tone and rendering the whole exercise almost pointless. Not to mention ground hum issues caused by non-isolated outputs. On the other hand, active ABY pedals are in short supply and are usually quite cumbersome.

Featuring two buffered outputs, one with a custom designed isolating transformer, we are pretty confident that the Amp Detonator is the smallest active, fully functional, buffered ABY pedal on the market. What’s more, it’s the only active ABY switcher that can be powered by a 9V battery. The transformer output has been meticulously engineered to be as transparent as possible, whilst both outputs are buffered with a low noise, linear circuit. Drive any length of cable to your amps with no loss of clarity and switch silently between them. No more unnerving ‘thumps’ for you or the sound guy! The Amp Detonator also has a push-button polarity switch to correct common phase issues between amplifiers, keeping the tone fat and full. Finally, the tri-colour LED is a handy feature, especially on dark stages, indicating your current switching setting at a glance.

Driving long cables is no problem as the Amp Detonator’s buffered low impedance signal ensures your input’s upper frequencies are maintained. Output B features an isolating transformer which eliminates common ground loop hum when using two amps simultaneously. The transformer output has been engineered for maximum transparency, correcting some of the tone-altering characteristics that affect many other ABY boxes.

Two amps out of phase with each other sound awful but many ABY switchers ignore this. Even if the amps are in phase, running different pedal chains to each amp can reverse the polarity of the signal, causing the two signals to be out of phase when engaging both amps. The Amp Detonator addresses this with a simple fix on the top of the unit.

The only active ABY switcher that can be powered by battery as well as a 9 or 12V DC adapter. It also features an internal charge pump circuit which doubles the voltage internally to 18V, increasing the internal headroom for incredibly low harmonic distortion.

Need a professional ABY switcher but pedalboard space is at a premium? Other small amp switchers exist but none offer the quality or the functions of the Amp Detonator: silent operation, isolated outputs, phase switch, individual footswitches  for A/B or BOTH and an oversized 10mm tri-colour LED – green for A, red for B and blue for BOTH. 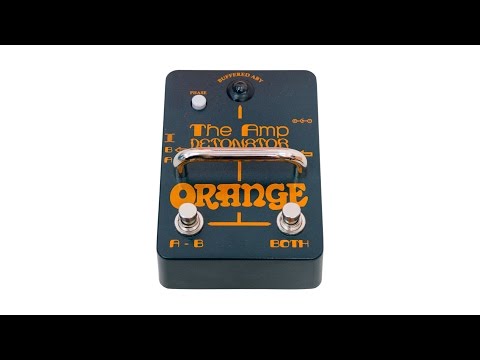